Posted by Yuyutsu Sharma at 4:45 AM No comments:

11/13/2017 Yuyutsu Sharma hosted by Jim(Need a prompt? How do you explain your position on the planet? -- you don't have to use those words.) 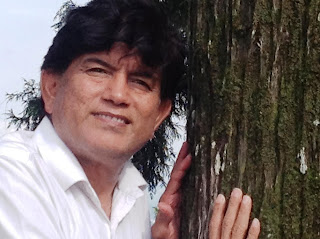 Yuyutsu R D Sharma has  published nine poetry collections including, A Blizzard in my Bones: New York Poems (Nirala, 2016).  He has translated Irish poet Cathal O’ Searcaigh and Hebrew poet Ronny Someck into Nepali.  Eternal Snow: A Worldwide Anthology of One Hundred Twenty-Five Poetic Intersections with Himalayan Poet Yuyutsu RD Sharma is his most recent publication.  Yuyutsu’s work has been translated into German, French, Italian, Slovenian, Hebrew, Spanish and Dutch.  Yuyutsu is the Visiting Poet at Columbia University, New York and has just returned from China where he had gone to read at Beijing International Book Fair.

On the great Tibetan
salt route they meet me again

On their faces
fatigue of a drunken sleep

their lives worn out,
their legs twisted, shaking

Age long bells clinging
to them like festering wounds

sacks of rice
and iodized salt from the plains of Nepal Terai.

Butterflies of
the terraced fields know their names.

Traffic alert
and time-tested, they climb

pamphlets
of a secret religious war

filth
of an ecologist's sterile semen

entire kitchen
for a cocktail party at the base camp

the West's weird visions
lusting for an instant purge.

Stone steps
of the mountains embossed

on their drugged brains,
like lines of aborted love

scratched
on the historic rocks of waterspouts.

the ache
of their secret sweat.

Sunny days
along the crystal rivers

taste
of their bleeding eyes.

like real mules
clattering their hooves on the flagstones,

in circling
the cruel grandeur


mule paths around the glaciers of Annapurnas.
Posted by Yuyutsu Sharma at 11:31 PM No comments:

In the workshop
Yuyu will share his experiences and recite mantras and prayers to evoke the Himalayan world, especially, Devataatma, a Sanskrit word for the Himalayas, meaning the place where Soul of the God lives. After years of traveling the globe as an itinerant poet, Yuyutsu Sharma has earned the respect and admiration of thousands of people all over the world. Yuyu will unravel the secrets of Himalayan spirituality, inducing the participants to write fresh poetry likely to be published in the second volume of Eternal Snow.
The Reading will be the
The Brooklyn launch of
“Eternal Snow:  A Worldwide Anthology of One Hundred Twenty-Five Poetic Intersections with Himalayan Poet Yuyutsu RD Sharma”
will take place.

Editors will share their experiences of editing this mammon anthology.

Posted by Yuyutsu Sharma at 8:07 PM No comments:

'Eternal Snow', an anthology reflecting Nepal and the Himalayas 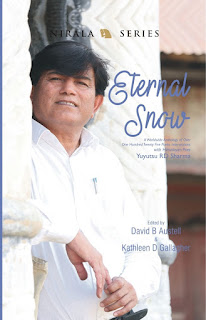 A 320 – page poetry anthology dedicated to Nepal, Nepali, Kathmandu, the Himalayan Range, rivers and the country's cultures has been published.

They wrote the poems on Nepal following interactions with the Himalayan Poet during his world tours. Sharma said the anthology is a testament to the power of words to inspire, encourage, and heal across vastly disparate cultures and distant places.