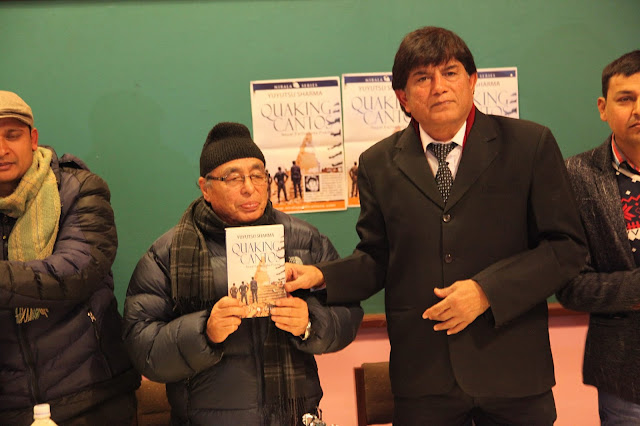 "The soul of the Nepal lies in Nepali poetry,” Yuyutsu said, explaining how from the beginning poets like Rimal, Devkota, Bhupi and Sakar have played vital role in ushering democracy in Nepal.”

Yuyutsu Sharma new book, Quaking Cantos was launched by the poets included in the Drunken Boat Nepal Issue. Yuyutsu read his poems like “I see my world shaking” and “Family Deity” from his Quaking Cantos focused on Nepal earthquake, 2015. He is also working on a Nepal Earthquake memoir and will be published next year. Nepali poet and novelist, Hari Adhikary appreciated role of White Lotus in organizing weekly White Lotus poetry series for more than 20 years and appreciated Yuyutsu’s role in making Nepali literature known to the outside world.

Artist including s Hari Khadka, Naresh Sainju and Prasant Shrestha also expressed their views and shared memories of their past collaborations with poets and writers.
Posted by Yuyutsu Sharma at 7:31 AM No comments: Links to this post