Mona Lisa’s drunkfrom her green eyes’ glamourthat open and kissquivering doors of the temple of my face.

Her skirt swirls  in the cold colorless skies of Europe.

Her mysterious smile, a succulent ploy, demanding  forbidden touch on the crimson Cutthat denies and even divides the divine.

I mildly tug at her scarlet scarf, wrapping it round my neck, dance, holding her slender waist along the shores of Northern Sea flooded at this hour from goods and god men from Asia.

It’s here somewhere one timemandalas of my defeats were drawn.Along these shores Alexander’s horses laughed and leered before beginning that sojourn into the heart of darkness.Along these blue waters I smell the gunpowder that once burstthe chest of the Continent into blood-soaked fragments.

Years before my birth it’s here somewhere that captorsof Mona Lisawrote her ambiguity and my future.

Today she’s drunk.She drools over psychedelic visions of LSD and Ecstasyspinning mysteriously like a supernova in the embrace of infested stars.

“I live in a car,” she confides.“I live on the blade of this city’s screaming sirens.I survive on the endless night in a squatted artists’ bar. I dance on full moon’s face all through the night’s eternal orgasm till I melt and become one — cup and the bar.My lips purple blue, my eyes swollen like Aristophanes’ frogs, blade of my sleek tongue, my long leathery fish in my mouth reeking of sulfa and exhausted sea shores. I burgeon on the Hippie smoke of Sixties.Spiritualists, Swamis and Surrealists have masturbated white lotus of my slender body. Dadaists and Beatles have sucked salt of my soul for decades.Buddhists have licked me cleanlike stone pillow under sleeping Siddhartha’s neck.Avant-Gardes have lain at my bed for years.The Punk I taught flowers have fire in them.I’ve been traveling now for decades I’ve been to Amazon and Americas.I’ve been on the Asian loop:Cambodia, Laos, Vietnam, Thailand, India, China.I’ve plans to visit Tibet,Kathmandu, Kandahar, Kabul, Kashmir.”

She tosses her pink cap onto my headand taking a sip of red wine from my cupbends to kiss my dark eyes.“It’s your turn now, Yu Yu, you man from Asia,any moment I can pull a blanketfrom my car and spreading itlike bejeweled sky can go into a Tantric trance.

Yuyutsu Sharma is the recipient of fellowships and grants from the Rockefeller Foundation, Ireland Literature Exchange, Trubar Foundation, Slovenia, the Institute for the Translation of Hebrew Literature and the Foundation for the Production and Translation of Dutch Literature, and is a Himalayan poet and translator. He has published ten poetry collections. Half the year, he travels and reads all over the world and conducts creative writing workshops at various universities in North America and Europe but goes trekking in the Himalayas when back home. Currently, Yuyutsu Sharma edits, Pratik: A Quarterly Magazine of Contemporary Writing.

The banner image is by Filepe Vieira and downloaded from Unsplash.com

Posted by Yuyutsu Sharma at 3:33 AM No comments:

By the Ocean : A Poem for my Mother 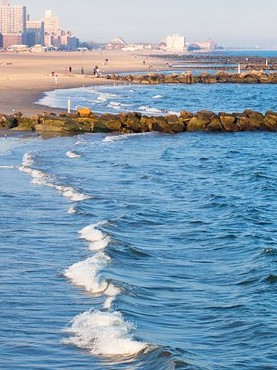 and galaxies of untouched dreams,

she rode the golden cart

pulled by Mahadev’s own

arc of the thatched rooftop

and stepped onto the main street.

‘Look at her, how strong she is,

in spite of her age,’ I tell Shakti,

as we watch from the rooftop.

her gaze and saunters onto

the stretch of green fields

Shaken by the drone

of the central heating boulder

I woke up, feeling

a sudden rush of the youthful energy

she spent with us and then left,

making me dream of her

in this strange steely island

by a sopping wet shore…

From A Blizzard in my Bones: New York Poems

Posted by Yuyutsu Sharma at 9:47 AM 2 comments:

From The God's Messy Workplace: "Outage" by Yuyutsu Sharma 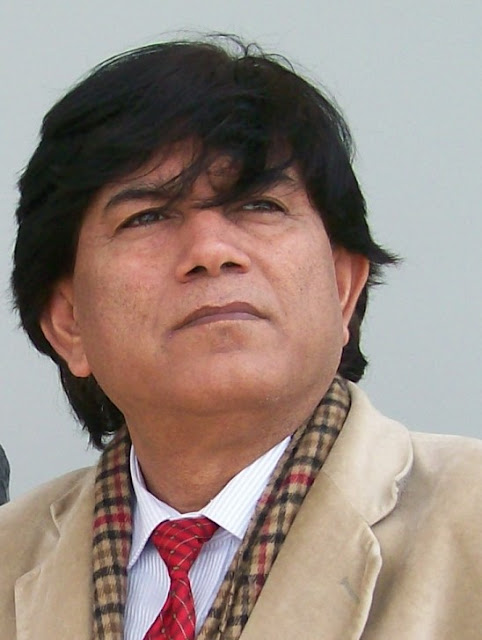 of my living room,

Posted by Yuyutsu Sharma at 7:56 AM No comments:

Yuyutsu Sharma in conversation with Meenu Pokhrel at Nepal Television! 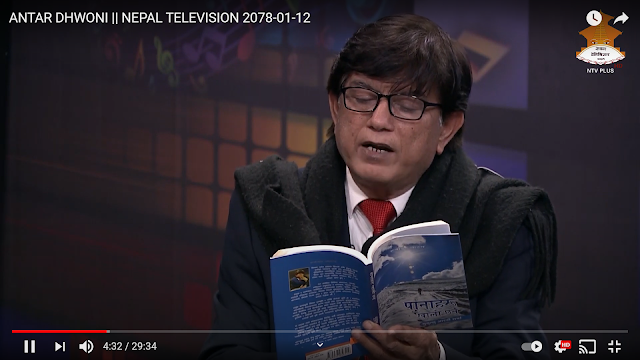 Posted by Yuyutsu Sharma at 9:58 AM No comments: 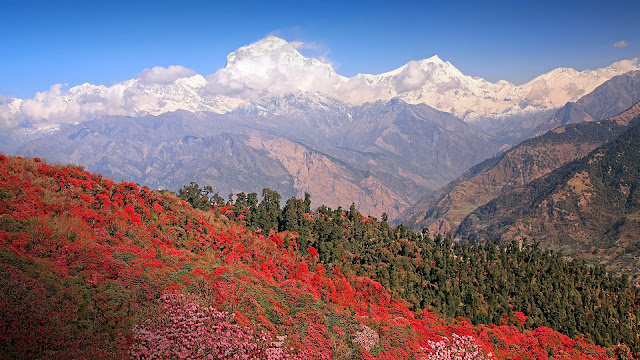 of a clammy honeycomb comes

dripping out of a sobbing night

and clings to the frozen calf of my leg.

There’s a scent of spring

back again to dance in my nostrils,

suffused with a stinging odor

of our shrunken canyons.

I leap out of the bed

and thump my foot to let it

fall off to the grassy ground,

in the stabbing sunlight

of a wounded day in our  boorish republic.

I whisper, seeing she’s about to scream.

They  mustn’t sense our fears,

the fright to live in a plague is to suffer

the fate of a bonded sex-worker,

to endure the inevitable,

and in silence surrender to lethal

pleasure of the demented Deities.

Each moment a hazard,

each day a fresher revelation

of the master’s disregard  of the corpses

piling up in newly-founded crematoriums.

I step out of the house

in the Himalayas to venture out

into our canyons aflame

from the flush of rhododendrons

like a wild beast as it did a year ago

holding back the delight

celebrating the arrival of

a succulent spring in our glistening valleys. 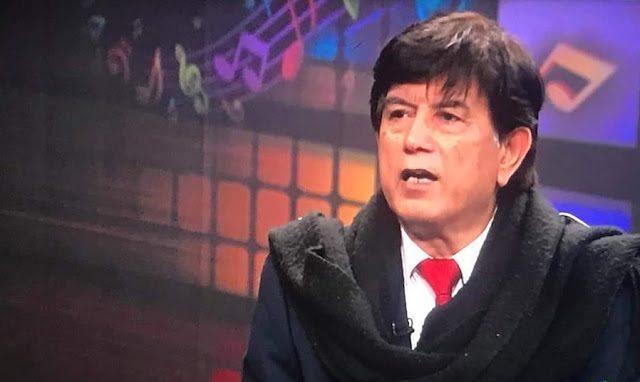 Posted by Yuyutsu Sharma at 3:20 AM 2 comments:

Upcoming first Zoom reading on May 1st, 2021 for the 2022 New York Writers Worshop 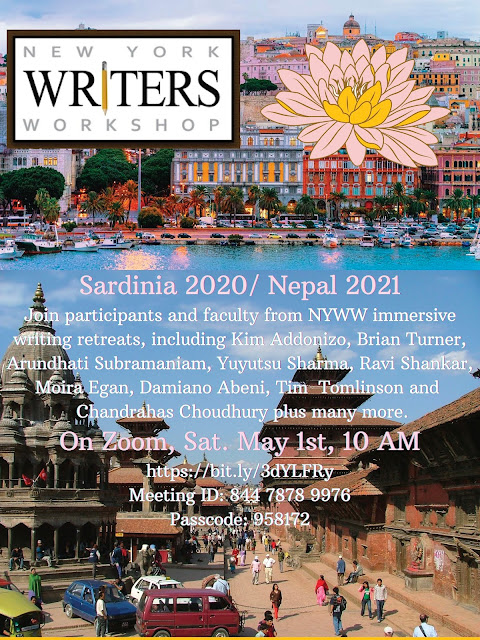 Posted by Yuyutsu Sharma at 4:26 AM No comments:

A Morning Walk by Yuyutsu Sharma in Punjabi and Rajasthani

the bed of white lotus

partner of my sleep

I closed my eyes

in the dark interior 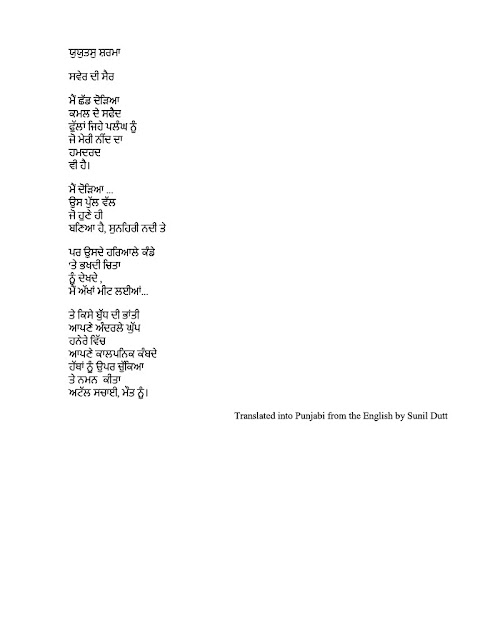 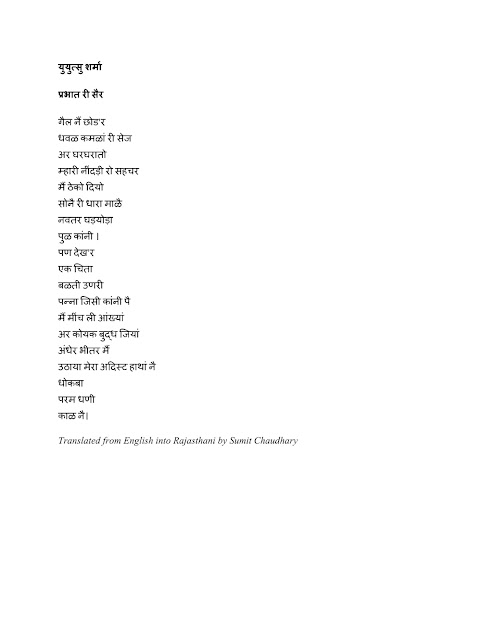 Posted by Yuyutsu Sharma at 12:52 AM No comments:

"Battling it" A Poem by Yuyutsu Sharma from "God's Messy Workplace: The 2020 Poems 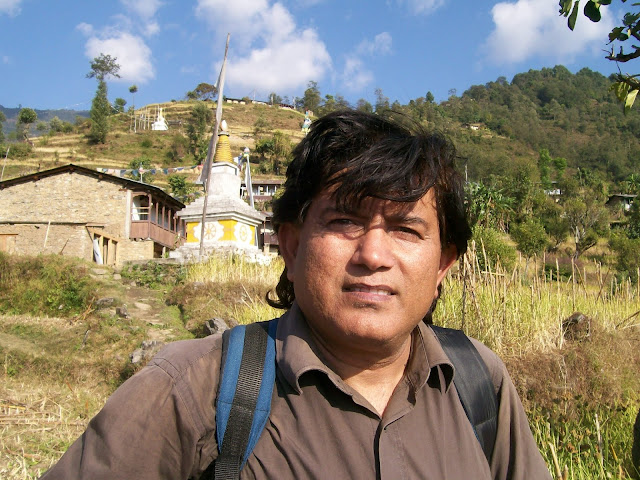 Each moment an ambush

in the nether world of my sleep

Each day a scuffle

with headless phantoms from

the blind caves of high hills

where a giant yeti awaits,

to feed a million more plagues.

the crashing of colossal waves

over thrumming  route of my wind pipe.

nine months of so many misshapen regimes,

flying vampires scuttling over the faulty

horoscopes of this planet’s destiny

in the cobalt blue rivers of our joy.

and I resolve to walk again

against the mangled currents to reach

the favorite spots in my beloved city,

only to rush back home

shuddering from an erratic rush

of my breath unhinging my sturdy frame

inherited from my wrestler ancestors.

A sensation stirs in a corner

of my right lung and inflames

into an inferno of endless pain.

Have I fallen prey to its tentacles?

How did it happen? I ask.

Did it occur at the Grocery store

or in a city bus?  Couldn’t you

have waited a while,

looked for a cab

or simply walked to the spot?

Where was there this hurry?

It was about to rain;

So where you think you picked it up;

as you passed by Hanuman Shrine

near your place with devotees thronging it,

singing out loud, jamming the sidewalk?

Hasn’t  it finally grabbed you by the throat?

A mild rasping begins and gets stuck in the lungs,

a burning sensation blights down my spine,

the flame of my breath gets shredded,

pulled from the sleek glistening

bodies of the patron serpents of the valley?

Breathless, I feel it loping down

the depths of my blood vessels.

I try restraint, try to tackle the impending

onslaught of an anxiety by meekly submitting

myself to its preferred sister, Sleep,

to ward off its imminent arrival,

Lord’s  cudgel without a signal, or a sound,

only to wake up next morning to savor

a  full-blown loaf of a summer day

in my courtyard dancing

with the music of  its sunny,

Posted by Yuyutsu Sharma at 8:30 AM 2 comments:

A lovely review of my Nepali collection by Raju Syami in the current issue of leading Nepali literary monthly, Madhuparka.. 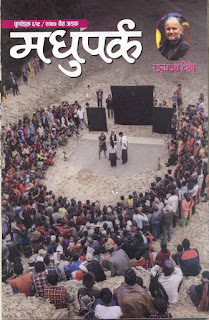 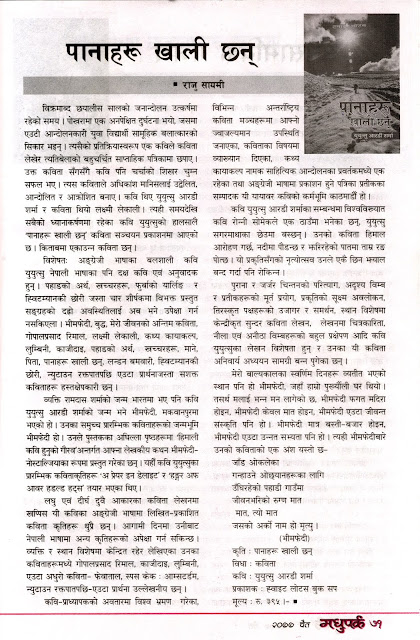 Posted by Yuyutsu Sharma at 8:14 AM No comments:

Yuyutsu Sharma
Recipient of fellowships and grants from The Rockefeller Foundation, Ireland Literature Exchange, Trubar Foundation, Slovenia, The Institute for the Translation of Hebrew Literature and The Foundation for the Production and Translation of Dutch Literature, Yuyutsu Sharma is a world renowned Himalayan poet and translator. He has published ten poetry collections including, The Second Buddha Walk, A Blizzard in my Bones: New York Poems, Quaking Cantos: Nepal Earthquake Poems, Nepal Trilogy, Space Cake, Amsterdam and Annapurna Poems. Three books of his poetry, Poemes de l’ Himalayas, Poemas de Los Himalayas and Jezero Fewa & Konj have appeared in French, Spanish and Slovenian respectively. Half the year, he travels and reads all over the world and conducts Creative Writing Workshops at various universities in North America and Europe but goes trekking in the Himalayas when back home. Currently, Yuyutsu Sharma is a visiting poet at Columbia University and edits, Pratik: A Quarterly Magazine of Contemporary Writing. https://niralapublications.com/nirala-authors/yuyutsu-rd-sharma/