The Flowers of Cordoba

The Flowers of Córdoba

Córdoba.
Far away, and lonely.

olives against my saddle.

Though I know all the roadways
I’ll never get to Córdoba.

Through the breezes, through the valley,
red moon, black pony.

Death is looking at me

from the towers of Córdoba.

Spanish poet and translator, Veronica Aranda read the poem aloud as we walked in mild drizzle under a mottled Mediterranean sky.

Unlike Lorca, I did reach Córdoba. Walking under the towers where Lorca prophetically imagined death on the lookout for him, I had a feeling of being in a power place. In the palace packed with people and reporters, controversial French poet Michel Houellebecq started the festival with his solemn recital. This is the place where the Spanish Inquisition was planned, where seeds of Columbus Crusade lie. A minute ago in the famed gardens I had joined the fellow poets from around the world-- Ana Marcos, Ana Istaru, William Ospina, Robert Hass, Sebastia Alzamora, Amalia Bautista, Nicole Brossard, Ma Auxiliadora Alvarez, Arnaldo Calveyra, Abbas Beydoun, Elisa Biagini, Fatima Naoot, Edoardo Sanguineti for a photo shoot.

Córdoba is fighting to be the cultural capital of the European Union for 2016. I was there last month to launch a Spanish translation of my poetry, named, “Poemas de los Himalayas ,” published this year by Cosmopoeticia International in collaboration with Juan de Mairena y de libros. They had set up several readings in schools, art centers, state prisons and other public venues in the county.

Córdoba like Nepal has this great cultural past, a syncretisation of various religions and civilizations. Romans came in 2nd century BC and ruled Córdoba for close to nine centuries. Then under the Islamic rule (711-1263) Córdoba became a great intellectual and political center, followed by Christian victory when the Castile defeated the Western Caliphate from Córdoba. La Mezquita (The Mosque) by the edge of the river Guadalquivir stands as an enduring symbol of Andalusia history. The city holds central place in the history of Europe and the remnants of ancient Islamic, Jewish and Catholic religions are visibly intermixed in the contemporary life and architecture.

Walking in the Spanish streets with lurid balconies and patios fragrant from orchids and geraniums was a stroll down the European history’s narrow lanes. This was the place where great Greek philosopher Seneca was born and Jewish philosopher, Maimonides wrote his ground breaking works, “Astrology is a disease, not science.’ World famous painter Picasso hails from the Andalusia .

My first reading was in a Córdoba secondary school. Hundreds of children gathered in the auditorium. Soon I realized the situation I had stepped in. Shortly I learnt that the students understood very little English. My translator poet Veronica hadn’t arrived from Morocco where she worked at Cervantes Center , I was thinking of an interpreter that Jacqueline Hamil, English teacher of the school came to my rescue. Washington-born Hamil was kind enough to interpret throughout the event. She also translated the other poet, Araceli Sanchez Franco reading along at the same event.

I began my reading with a Namaste, “It is great honor to read my Himalayan flowers to little flowers in this hall.”

A pin drop silence. No response. At loss, I turn to Jacqueline. She translates what I have said and then a roaring thunder rants the air, assuring room for a dialogue.

Arcelia read poems about Potla Palace and Dalai Lama as her parents have been practicing Buddhism for decades. About half a dozen students had prepared to read my poems in Spanish. One little girl came to the dais, leaned over her Spanish teacher sitting next to me and shyly said, “What if they laugh at me.”

After the event, even when the teachers had left, those hip hop flowers stayed on briefly, their cell phones zooming in and out to pose with the poet from the other end of the world, from the rooftop of the world.

The writer can be reached at writer@yuyutsu.de

Annapurnas and Stains of Blood:
Life Travels and Writing on a Page of Snow
( Nirala Publications, New Delhi-2)

(Google translation of the Spanish Text)

Reading Marcos Ana, William Ospina and Yuyutsu RD Sharma has put the finishing touch to the poetry workshop for the fourth consecutive year has been developed in the provincial prison in collaboration with CIC-Bata. Cosmopoética stresses that the recital, which was presented by the instructor of Poetry for Freedom, Alejandra Vanessa, "the excitement has maintained throughout its course but has been with the intervention of Marcos Ana when it has risen further."

Reading Marcos Ana, Colombian William Ospina and the Nepali Yuyutsu RD Sharma, has served to put an end to the poetry workshop for the fourth consecutive year, was held in the provincial prison Cosmopoética within the framework of a meeting who participated in the World Poetry in Cordoba with the collaboration of CIC-Bata.
In a statement, Cosmopoética stresses that the recital, which was presented by the instructor of Poetry for Freedom, Alejandra Vanessa, "the excitement has maintained throughout its course but has been with the intervention of Marcos Ana when it has risen more .
Ensure that the poet spent 23 years in prison for political reasons and was twice sentenced to death for it, and as he assured his audience "I feel a particular emotion to be among you."

She recognized that, despite the fact that in prison "lost youth and the first part of my life" and that this experience has been "simultaneously the hardest and the most I've lived" (...), "the prison was my university, I learned to be a man, and writing, not a privilege, but I owe everything. "
After his words, optimistic, despite everything, the poet wanted to give the audience some of the poems he wrote during his captivity. Biography, My heart is patio, tell me what a tree or Charter the world were heard before an excited audience.

Then came the turn of the Colombian William Ospina whose poetic production is closely linked to nature, as demonstrated by the love poems of the young eagles or Song of both worlds.
Yuyutsu RD Sharma was in charge of closing the recital, by the poets of the world, with a series of lines in which were very much the landscapes of his native Nepal, and completed with a reading in Nepali.

The fifteen students, eleven men and four women, which this year have attended the workshop also recited two poems to complete the act. His instructor, Vanessa Alejandra stressed that this cultural initiative, students not only learn literary techniques "but to express what they have inside.
In this fourth edition, whose production is covered in the plaquette Melody of 2010 inmates have participated poets Jesus Fernandez, Maria Gonzalez, and Ana Matilde Cabello Patricia Santaella who have come to the prison inmates to share their literary experience.

At the closing ceremony of Poetry for freedom have attended the Councillor for Education of the City of Cordoba, Elena Cortes, Equality, Marian Ruiz, President of CIC-Bata, Federico Romero, and the director of the Prison Cordoba, Ana Martín .

Posted by Yuyutsu Sharma at 9:07 AM 2 comments: Links to this post

Translated into Spanish with an Introduction
By Veronica Aranda
By Cosmopoeticia, Cordoba, Spain

Posted by Yuyutsu Sharma at 9:09 AM No comments: Links to this post 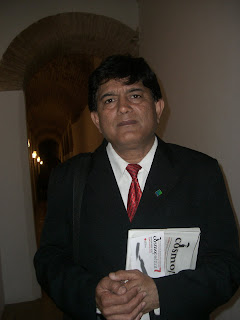 Etiquetas: Cosmopoética, fernando sánchez mayo, Yuyutsu RD Sharma
Posted by Yuyutsu Sharma at 8:48 AM No comments: Links to this post