The Wait is Over: Eternal Snow is finally out, available on Amazon

Eternal Snow is a testament to the power of words to inspire, encourage, and heal across vastly disparate cultures and distant places. Over one hundred and twenty-five poets from around the world come together in this anthology to explore their interactions, collisions, and intersections with Yuyutsu Sharma, renowned Himalayan poet, journalist, translator, and editor from Kathmandu, Nepal.The book is a clear example of the new world itinerancy of the modern poet, and the global efficacy of poetry, in that Yuyu's world travels have touched the hearts and minds of thousands of people who have heard his readings around the world and read his words in print and on-line. Not all the contributors are professional poets. Eternal Snow also captures the poetic voices of a hairstylist, a photographer, a Yoga teacher, a priest, a nurse, and a social scientist. In these pages, a young poet in Kathmandu sees her late father in Yuyu's face; a social worker conjures the Goddess of the Children while serving the Bhutanese refugees in California; a New York University professor ponders an Asian challenge: setting her house on fire to become a real poet. The results captured in these poems attest to the literary collisions which occur when global poets meet. Eternal Snow is a singular, remarkable, and moving work of art. Includes poetry by John Clarke, David Ray, James Ragan, Ravi Shankar, Eileen O'Connor, Gorka Lasa, Pascale Petit, Elena Karina Byrne, Chuck Joy, Amarendra Khatua, Ruth Danon, Tim Tomlinson, Verónica Aranda, David Axlerod, Tony Barnstone, Art Good Times, Kim Nuzzo, Robin Mets, Barbara Novack, Hélène Cardona, Irene O' Garden, Agnes Marton, Carolyn Wells, M. L. Williams, Diane Frank and Others

“When you first meet Himalayan poet Yuyutsu RD Sharma, you are taken immediately by his quiet passion and reverence for the art and purpose of poetry, which, when taking the stage, he transforms into a voice that crosses continents and soars like the snow in wind that permeates “the solemn silence of sacred sounds” in his beloved Nepal. Through his intercession, poems become chants of eternality.  He has sought the same in the poets represented in his anthology “Eternal Snow,” a hundred voices who, like him, give reverence to the power of words in translating truth through passion into a universal poetic of sacred sounds.”
–James Ragan, Distinguished American Poet  & Author of Too Long a Solitude & The Hunger Wall among others
Yuyu has touched the hearts and minds of a multitude of people and writers around the world, as evidenced in this wonderful book, Eternal Snow…The poetry included in this volume speaks to the constant intersections with Yuyu Sharma, collisions of persons, spirits, literary visions, affect and effect, all of which have at their center this remarkable person and precious talent. It is my delight and honor to be among such a cloud of witnesses.
–David Austell in Preface to Eternal Snow
No matter where the poets live, from a small city to large, to countryside or village, Yuyutsu’s poetry and teachings transform writers from across the world, allowing them to reach into their own writing dreams and visions. Indeed, each poet no matter his or her walk in life, whether professional poet, performer, professor, minister, or word-loving hairstylist who scribbles down thoughts about her love for her dying mother, all have discovered his or her own creative awakenings when encountering Yuyutsu Sharma’s work. Yuyutsu’s work has far-reaching effects in personal transformation.
–Kathleen Gallagher in Introduction to Eternal Snow 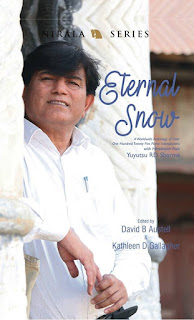 Posted by Yuyutsu Sharma at 10:42 AM No comments: Links to this post